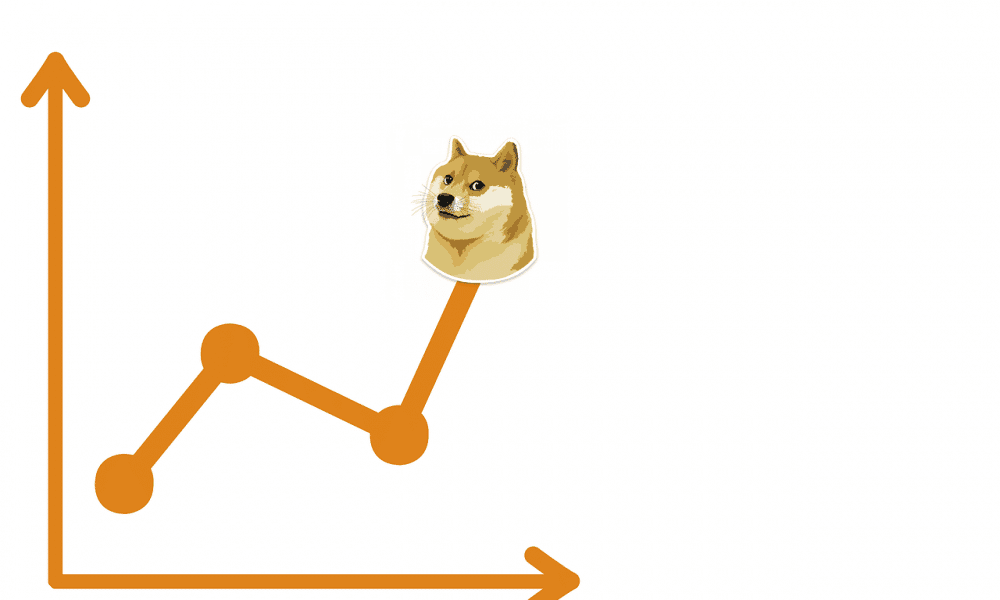 Have your ever heard of a joke that outstayed its welcome? Yeah, you too, right? Well, many would say that the likes of Dogecoin are in the same league too. It started as a joke and well, maybe it still is. However, there are many who would disagree with the same.

Some believe otherwise, however. For instance, have you ever heard a joke that evolved to become something else entirely. According to a few, Dogecoin is a perfect example of such a ‘joke.’ In fact, it’s no surprise that DOGE holders have laughed all the way to the bank over the years,

All of us remember the frenzy around the world when cryptocurrency first arrived on the internet. The blockchain-enabled token system had a rather grandiose plan to transform the dull financial system. It envisioned a decentralized and autonomous financial system, remaining trustless and regulation-free. The pioneering titans of the cryptocurrency industry dreamt of an alternate world order that would offer to us a bank-free financial system with no external intervention.

Needless to say, such a grand plan elicited suspicion, and invited smirks. Billy Markus and Jackson Palmer, a pair of software engineers, thought that the whole crypto affair was being taken far too seriously and decided to do something fun about it. In December 2013, they created a memecoin named Dogecoin to poke fun at the ultra-serious crypto maximalists.

The token featured an image of an adorable Shiba Inu dog, a rare breed of hunting dog from Japan. Dogecoin went viral on social media platforms such as Reddit, gaining instant popularity worldwide.

Dogecoin soon earned a devoted following. Those who were interested in cryptocurrency but were not too serious about its alleged revolutionary potential, were the first to flock to this memecoin. People who liked this breed of Japanese dogs also bought this memecoin. Anyone willing to casually engage with cryptocurrency also participated in the Dogecoin culture.

However, as it gained more traction in the market and its value increased, people began to buy this joke of a cryptocurrency in earnest. Today, it is the 10th largest cryptocurrency by market capitalization, and post the Ethereum Merge, has emerged as the 2nd largest Proof-of-Work (PoS) cryptocurrency after Bitcoin. In fact, the value and popularity of this memecoin grew so popular that it was the sleeve sponsor for the English football club, Watford F.C. for the 2021-22 season, as reported by The Atlantic.

Thanks to the popularity of Dogecoin, a herd of meme-inspired cryptocurrencies have mushroomed across the globe- Shiba Inu being the most popular among them. Over the years, more than 200 meme coins have been created since the launch of Dogecoin.

One of the reasons behind such a surge was it being mentioned on social media by tech and entertainment giants such as Elon Musk, Snoop Dogg, and Mark Cuban. On 8 May 2021, it hit an ATH of $0.7376. At the time of writing, Dogecoin was trading at $0.0617 on the charts.

“Dogecoin can be a joke and still be functional … While the branding is frontal jokes and memes, everything under that has been solid from the start.”

What is peculiar to Dogecoin is it being a fascination of the business magnate Elon Musk. Musk even supported Dogecoin on Twitter and once called it a hustle on an SNL episode, significantly pushing its price both the times.

So far, DOGE has been used to reward creative users on Reddit, Twitter and other such networks for good content. People can also get tipped with DOGE in the eponymous online communities where the currency is popular. Another new concept for our readers might be the existence of Dogecoin faucets. A Dogecoin faucet is a website that gives you a Dogecoin for free so that you get introduced to the world of Dogecoins and become an active member of this meme coin community.

Only recently, Billy Markus, the co-founder of Dogecoin, rejected a $14 million offer to promote Dogechain, the unofficial layer-2 solution for the meme coin. Many believed that the decision reflected Billy’s loyalty to the Doge community. Decentralization is a central marker of this revolutionary financial system and forging an alliance with another group is a possible violation if the latter comes to dominate the system. Keeping the memecoin community fun and independent has been the cornerstone of the belief system underlying the growth of the community.

Today, Dogecoin is as mainstream as Bitcoin and is traded on all the major cryptocurrency exchanges such as Coinbase, Gemini and Binance.

Many prominent members of the blockchain and fintech communities are currently involved with Dogecoin. A foundation was formed in 2014 to support and govern the project but it dissolved over time. It was reinvigorated in 2021 by members of the original core team along with fresh faces and new seasoned advisors ready to grow Dogecoin for the decade ahead.

We can see how a currency that began as a joke has come such a long way that the most prominent members of the crypto community are today leading, advising, and monitoring its development.

Let us explore how this fun cryptocurrency, one that claims to “Do Only Good Everyday,” will perform in the next few years.

Why these projections matter

Dogecoin is the pioneer among all the memecoins active in the market. It is only after the initial success of Dogecoin that other memecoins like Shiba Inu and Monacoin entered the market. In fact, at press time, it was among the market’s top 10 cryptocurrencies.

Dogecoin remains immensely popular among its core fanbase and other crypto-enthusiasts. Currently, its Twitter and Reddit communities have 3.4 million and 2.3 million members. A major reason behind its increasing value has been the support of these online communities.

In January 2021, its price saw a hike of 800% in just 24 hours when a subReddit named r/SatoshiStreetBets began pushing its price to make it the cryptocurrency equivalent of Gamestop. In early April 2021, it rose by 400% after popular crypto-exchange Coinbase went public and Elon Musk tweeted about Dogecoin.

Before investing in Dogecoin, it is wise that you should be aware of its previous performance, studies and market predictions. It is precisely for this reason that we are providing a summary of most reliable predictions regarding Dogecoin, in addition to the Fear & Greed Index.

Dogecoin’s price, market cap and everything else

The way Dogecoin began as a mockery of Bitcoin and other cryptocurrencies, its performance also broadly mimicked the performance of those currencies. Adverse market conditions towards the end of Q2 in 2022 completely ravished the crypto-market and Dogecoin couldn’t escape its brunt either.

In 2021, it remained one of the best-performing cryptocurrencies, peaking in May with an ATH of $0.7376 and a market cap of over $0.7 billion. Then, it quickly began descending. 2022 began with a fairly decent start for the cryptocurrency with a price of around $0.17 in early January. But since then, it has lost over 60% of its value.

Early 2022 was also fairly blissful for Dogecoin, though not as good as the previous year. In early April 2022, its market cap was $19.84 billion. Alas, since May, the same has been falling from around $17 billion to a little over $8 billion at the time of writing.

What is peculiar to Dogecoin is it being a subject of fascination for business magnate Elon Musk. Musk even supported Dogecoin on Twitter and once called it a hustle on an SNL episode, significantly pushing its price both times.

I will keep supporting Dogecoin

It has also won the support of other celebrities such as Mark Cuban and Snoop Dogg too. While the former’s NBA team Dallas Mavericks has been accepting Dogecoin as a payment currency, the latter supported Musk in his support for the meme coin on Twitter.

Another distinction between Dogecoin and other cryptocurrencies is that there is absolutely no cap on the number of Dogecoins that can be issued. Its website claims that it “has a diminished inflation rate because it has a fixed yearly issuance of 5 billion coins.”

Investors should understand that different analysts look at different sets of parameters to forecast market metrics. Different analyses can therefore widely vary. We should also remember that unexpected macroeconomic forces such as government regulations and wars cannot be foreseen. Market changes its course wildly during such changes. No prediction is therefore set in stone.

Now, let us see how different analysts have predicted the future of Dogecoin in 2025.

Coin Journal is rather bullish about the future of Dogecoin. Especially since predicts its wider utility as more and more merchants begin accepting it as a mode of payment, pushing its price to $2.59.

On the contrary, a Changelly blogpost mentioned that the maximum and minimum prices of DOGE in 2025 will be $0.28 and $0.23. It predicts a potential ROI of 452% for DOGE in the said year. Furthermore, an Analytics Insight report claimed that with adoption and cryptocurrency regulations set to get better, DOGE’s price could go as high as $0.77 by 2025.

As far as Finder’s panel is concerned, it predicted that DOGE will be priced at $0.19 by the end of 2025. These projections, dated July 2022, were curiously lower than its own January projections. Back them, the panel predicted DOGE will hit $0.32.

Even though predicting market metrics 8 years down the line is very speculative, it is nonetheless helpful to study the predictions of reliable crypto analysts regarding Dogecoin in 2030.

Capex writes that the further we look into the future, the harder it becomes to predict the prices of a cryptocurrency. It becomes especially challenging in a market that is as volatile as any cryptocurrency. According to the same, experts predict that DOGE’s price could surpass $0.80 in 2030. In a bullish market, its minimum price won’t go below $0.30.

Finder’s panel shared some DOGE price predictions for the year 2030 too. According to the same, the popular memecoin will hit a price level of $0.64 on the charts by 2030.

Experts opine that influencer marketing and promotions will also heat up DOGE’s price. It will also grow at a substantial rate. Features such as zero staking rewards and lack of new use cases will also impact the market.

Here, it’s worth pointing out that perhaps, Dogecoin doesn’t follow the traditional rules of a regular asset since it is a memecoin. Just consider what Panxora Hedge Fund’s Gavin Smith has to say –

“Detractors of the token forget that community is at least as important as uniqueness in the crypto-space.”

There’s the matter of updates too. Ordinarily, people would associate new upgrades and updates with a hike in the crypto’s price. However, has that been the case for DOGE? Well, not quite. In fact, Musk has been more useful as a catalyst. In fact, Finder’s panel seemed to agree with the said proposition.

Is it all good news all around though? Well, not quite. Look no further than TradingView, with its Technical Analysis flashing a signal of SELL as far as DOGE is concerned.

“Bitcoin Jesus” Roger Ver once famously said that the memecoin is superior and better than the pioneering cryptocurrency – Bitcoin. Now, whether the aforementioned predictions will come true or not depends on a lot of factors, some of which cannot be foreseen. Even so, for an altcoin that began as a joke, Dogecoin has certainly come a long way.

Recent reports suggest that a sharp rise has been witnessed in the memecoin as trends of whale activities are emerging. An analysis by the market research firm IntoTheBlock suggested that most of the whales intend on holding the tokens instead of selling them.

What is certain, however, is uncertainty. Especially since the Fear and Greed Index was flashing neutral at press time.

Can DOGE sustain its upward movement despite the current…